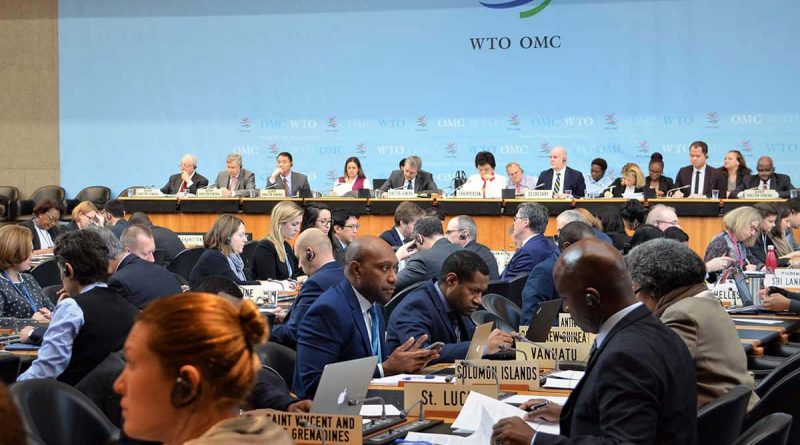 The General Council of the World Trade Organization (WTO) on Dec. 10 agreed to continue a moratorium on customs duties for electronic transmissions involving international commerce.

The country members will maintain the current practice of not imposing customs duties on electronic transmissions until the 12th Ministerial Conference (MC12) in Nur-Sultan, Kazakhstan, on June 8-11, 2020, the WTO said in a statement.

The Geneva, Switzerland-based trade body has renewed this moratorium at each ministerial conference since 1998 to continue addressing e-commerce issues in global trade.

WTO members also agreed to extend the 25-year-old moratorium related to the initiation of “non-violation” complaints under the Agreement on Trade-Related Aspects of Intellectual Property Rights (TRIPS) until the MC12 meeting.

The WTO said it continues to lack agreement on whether members should have the right to bring dispute cases to the trade body if they “consider that another member’s action or a specific situation has deprived them of an expected benefit under the TRIPS Agreement, even if no specific TRIPS obligation has been violated.”

In addition, the global trade body reached an impasse this week that will effectively shut down the work of the WTO Appellate Body. The Trump administration has been highly critical of the Appellate Body, which plays a key role in mitigating trade disputes between countries. The U.S. has blocked nominations to serve on the Appellate Body for the past two years.

U.S. Chamber of Commerce Vice President and Head of International Affairs Myron Brilliant urged the WTO “to revive [the Appellate Body] in a more responsive and focused form in keeping with the objectives established by the U.S. and other members when the WTO was created nearly three decades ago.

“If the WTO didn’t exist, we’d have to create it,” Brilliant said. “Its rules protect U.S. firms from unfair treatment and hidden protectionism every day. Safeguarding this institution and its dispute settlement system should be an urgent national and international priority.”