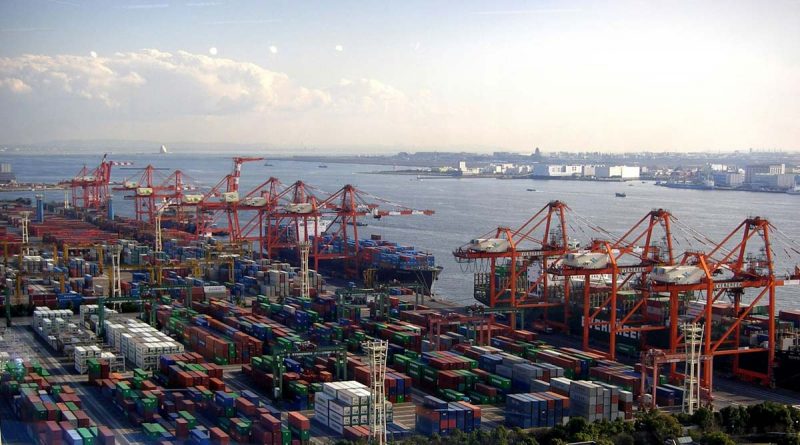 Activity at the Port of Tokyo

Exported box freight out of Tokyo was down by 5.7% compared to the first half of 2018, according to the Tokyo government’s figures.

The top five destination countries by cargo weight were China, the U.S., Thailand, Vietnam and Taiwan.

China imported 1.54 million metric tonnes from Tokyo in the first half of this year, which is a fall of just under 11% on the same period last year. Chinese destination cargo accounted for about 26% of all containerized freight by weight out of Tokyo during the first six months of the year.

It was a different story for U.S. destination cargo as exports from Tokyo to the U.S. rose by about 12%. U.S. destination containerized freight stood at about 1.5 million metric tonnes and accounted for 25.4% of Tokyo’s boxed export cargo throughput.

Number three on the export list is Thailand. Cargo volumes out of Tokyo and into Thailand were down too, by about 16%, to stand at about 412.8 thousand metric tonnes. So it can be seen that there is a marked step-down from the volumes exported from Tokyo into China and the U.S. compared to other countries.

Meanwhile, Taiwan received the fifth-largest amount of sea cargo from Tokyo, about 274.7 thousand metric tonnes in the first six months of 2019, which is about 14.8% down on the same period last year.

At 16.97 million metric tonnes, import volumes by weight into Tokyo are about three times greater than the weight of exports out of the port. Import volumes into the Port of Tokyo fell marginally by about 0.8% in the first six months of 2019 compared to the same period in 2018.

Containerized imports from China into Tokyo stood at 7.27 million metric tonnes, which was down by about 1.1%. Chinese imports accounted for about 42.8% of the weight of all cargo into Tokyo in the first six months.

The weight of boxed imports into Tokyo from the U.S. was down by about 6.2% to stand at just over 2 million metric tonnes in the first half of 2019 compared to the first half of 2018. As can be seen from the numbers, there is a big step-down between the volume by weight of imports into Tokyo from China compared with the U.S., which is the No. 2 source country. Cargo from the U.S. accounted for 11.8% of all of Tokyo’s containerized import throughput.

Thailand’s cargo volumes into Tokyo were down too, by about 2.7%, to stand at 1.15 million metric tonnes. Thailand-origin box cargo accounted for about 6.8% of all of Tokyo’s containerized throughput.

Vietnam took the fourth spot with 1.05 million metric tonnes imported into Tokyo. Vietnam is interesting because it fairly significantly bucked the downward trend — its cargo volumes into Tokyo rose by about 13.6%. This increase may be due to trade tensions between Washington and Beijing. It has been widely reported that manufacturers and shippers were starting to shift at least some of their operations and supply chains out of China and into Vietnam to avoid tariffs. Vietnam accounted for about 6.2% of Tokyo’s imported containerized volumes by weight.

There was also a significant 13.5% increase in containerized cargo imported into Tokyo from Taiwan. Box cargo sourced from the island of Taiwan stood at 791,730 metric tonnes. Taiwan accounted for a relatively small 4.7% of Tokyo’s import throughput by weight.