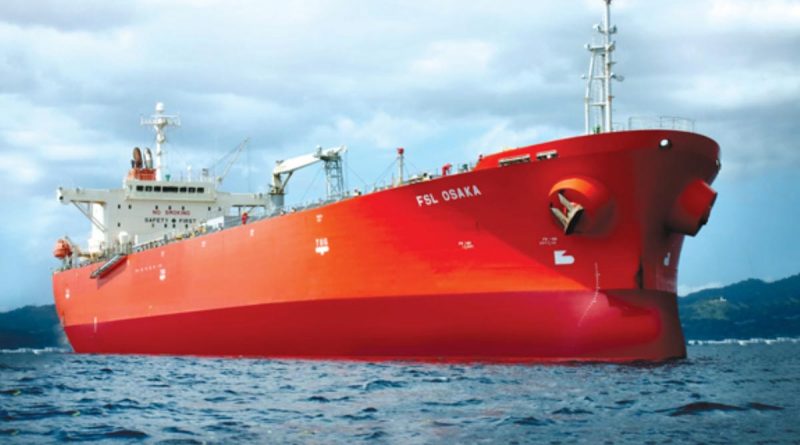 First Ship Lease (SGX: D8DU) reported earnings of $15.5 million in the third quarter of 2019, a 3.5% year-on-year rise on the $14.98 million recorded in the third quarter of last year. FSL swung back into the black with profit of $1.64 million, up in absolute terms by about $3.72 million as it had previously recorded a $2.08 million loss in the prior corresponding period.

The company attributed the increase in revenues to improved charter rates in shipping pools and in spot markets. FSL added in a further statement that about 66% of the trust’s revenues are derived from fixed-rate bareboat charters. The fleet (see below) has been fully deployed and is contracted until 2023.

FSL is a business trust that specializes in leasing oceangoing vessels to the international shipping industry on a bareboat basis. As the phrase suggests, “bareboat” means that FSL does not supply crew, provisions, fuel, administration or technical maintenance for the ship. The charterer pays all operating and insurance costs and is effectively in charge of the ship.

Depreciation of ships, which included the amortization of dry-docking costs, was the single biggest expense for FSL in the third quarter. This expense fell by 20.5% year-on-year, an absolute fall of just under $1.63 million. Another significant cost was “vessel operating expenses,” which were essentially flat at just over $5.3 million.

A significant cost decline was a $900,000 fall in finance expenses to $1.55 million. That represents a year-on-year fall in costs of about 36.5%. During the period, FSL paid down debt and also converted a bond into units (as FSL is a trust, it does not have shares, it has “units”). The fall in finance costs was therefore driven by lower debt and less payable bond interest.

“Our focus on strengthening the balance sheet was further supported by steadily improved profitability and cash flow. Despite market volatility, we remain cautiously optimistic about market conditions in the remainder of 2019 amid reduced tonnage supply with vessels being docked for IMO 2020 scrubber installations, combined with the incremental demand stemming from the anticipated change in trading patterns due to the new low sulphur fuel requirements,” said Roger Wood, the chief executive officer of FSL.

Meanwhile, FSL updated the market on Nov. 7, with a notice on how it intends to spend $31 million raised from the markets over the course of the last 12 months.

About $10.22 million will be used to repay debt (a bridging loan) incurred to the sponsor of a recent capital raising. Two lots of $4.88 million (so $9.76 million in total) will be used to pay the next 10% installment due on two new ships that the trust is building. The balance of $11.02 million is on fixed deposit with banks in Singapore.

The chemical tankers, FSL New York and FSL London, both built in 2006 with about 19,970 deadweight (a measure of the carrying capacity of a ship expressed in metric tonnes), are on time charters to Golden Stena Baycrest Tankers.

The two crude oil tankers, FSL Hong Kong and FSL Shanghai, both 2007 built and each with a capacity of 115,000 deadweight, are both employed in the Teekay pool.