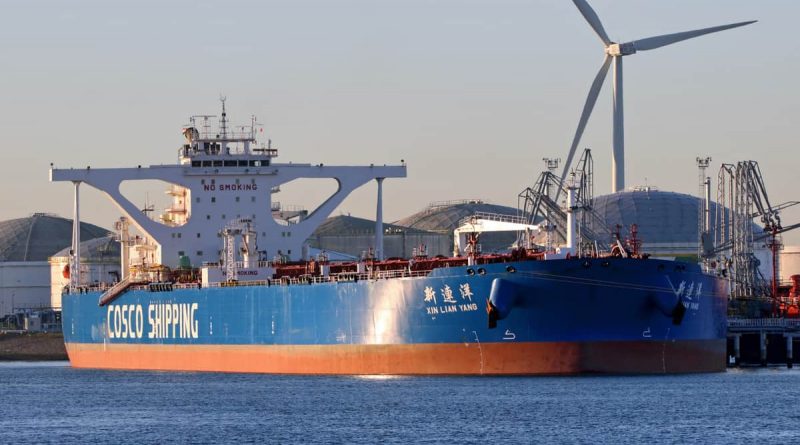 The ship pictured with this article is the Xin Lian Yang, a 2014-built, very large crude carrier, Hong Kong-flagged, with a carrying capacity of 322,861 deadweight tonnes.

COSCO Shipping Energy Transportation (HKEX: 01138; SSE: 600026) has shrugged off U.S. sanctions on subsidiary companies to report a huge jump in revenues and a massive surge in profits.

Revenue and income in the first nine months

CSET attributed the increase of 2.27 billion yuan ($311.47 million) to a recovery of the international oil shipping market and a consequent improvement in freight rates over the reporting period. The company noted, by way of example, that very large crude carriers (VLCCs) on the Middle East to China route had an average daily earning rate of $22,335 between January and September. This rate represented year-on-year growth of approximately 114%, CSET said. VLCCs are oil tankers with a carrying capacity of, or over, 300,000 deadweight tonnes (330,693 U.S. tons). Deadweight is the carrying capacity of cargo ships and is expressed in metric tonnes.

CSET added that daily earnings on major routes of “other tanker sizes” had year-on-year growth in the range of 64% to 225%.

That surge in freight rates boosted the company’s balance sheet. For instance, the company’s accounts receivable jumped by 786 million yuan ($109.95 million) due to the year-on-year growth in freight revenues. CSET added that revenues from a previous acquisition, COSCO PetroChina Shipping, helped boost group revenues in the domestic tanker segment in 2019.

Other factors boosting the company’s income were a year-on-year increase in the operating fleet and improvement in flexibility during the first nine months of 2019.

Costs and expenses in the first nine months

CSET noted that, during the third quarter of the calendar year, global oil demand hit about 100.70 million barrels per day (mbpd), which represented an increase of about 1.77 mbpd over the second quarter. This “demonstrated a promising trend in the global oil demand,” CSET said.

It added that oil production and exports from the U.S. continued to grow but the effect was “partially offset” by production cuts from OPEC nations.

On the supply-demand situation, there was an expanded tanker supply but many restrictions on the use of that supply over the year. CSET noted that while 52 VLCCs were delivered, only four such carriers were scrapped.

Meanwhile, IMO 2020 appears to have struck again as, CSET noted, “tankers participated in drydocking programs for installation of exhaust gas cleaning systems, which further reduced the effective tanker supply and improved the supply-demand dynamics of tankers.”

Other supply-demand issues cited by the company included restrictions on Iranian tankers and a “more complex” geopolitical context.

CSET did not discuss the effect of U.S. sanctions on its subsidiary companies.

Analysts are bullish on CSET

As has been previously reported by FreightWaves, CSET-related companies have been hit in recent months by U.S. sanctions imposed for allegedly continuing to transport Iranian crude oil.

Osbert Tang is an equity long-short analyst who provides insight via the Smartkarma investment research platform. Tang has been following the fortunes of CSET for a while. Prior to the publication of the third quarter results, he noted that the stock quickly rebounded from its low after the declaration of the U.S. sanctions. He also pointed out that the “recent almost 8x surge in VLCC spot rates should partially offset the negative impact of the sanctions.”

And, despite the continued presence of the sanctions, Tang did not believe that there was a material change in the company’s long-term prospects.

In his most recent research note, “COSCO Shipping Energy (1138 HK): 3Q19 Continued to Demonstrate Turnaround,” Tang points out that the transfer of ownership of companies “suggests that CSET has measures to handle the sanctions” on its subsidiary companies.

“We believe this is one of the evidences that CSET has the capability to handle the OFAC [Office of Foreign Asset Control] sanctions,” Tang wrote. He added that, because of ongoing negotiations between Beijing and Washington, he does not believe that the OFAC sanctions will “last endlessly.”

Meanwhile, commenting on CSET’s most recent numbers, Tang describes the group’s results as a “solid turnaround.”