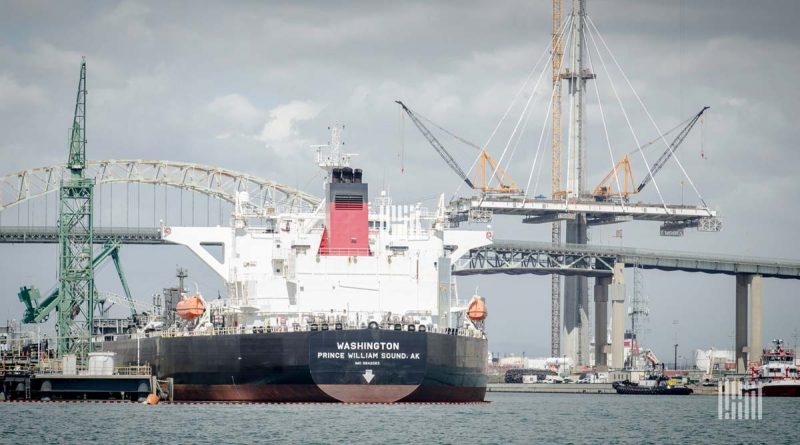 With high-sulfur fuels currently around half the price of low-sulfur options, container lines are rushing vessels to shipyards to get scrubbers fitted ahead of new International Maritime Organization (IMO) rules that become mandatory at the start of 2020.

The rules state that unless some form of emission abatement technology such as scrubbers has been installed on vessels, the sulfur content of fuel oil burned by ships operating outside designated emission control areas must not exceed 0.5%, compared to 3.5% now.

According to Alphaliner, more than 10% of container ship capacity will be fitted with scrubbers by January, with more to follow over the next two years. The differential between high-sulfur fuel (HFO) and low-sulfur fuel (LSFO) prices is the main driver of scrubber demand.

“The very high take-up rate for scrubbers reflects the attractive economics for these ships with the current price spread for low-sulfur fuel oil over HFO already reaching $250 per ton, which would provide the operators of these ships with substantial savings compared to conventional units that would need to switch to LSFO,” said a note from Alphaliner.

However, the strategy of carriers is widely divergent (see chart below), with some including Mediterranean Shipping Company (MSC) and Maersk betting big on scrubbers, while others including Ocean Network Express (ONE) are hoping that low-sulfur prices will eventually subside.

The attraction of scrubbers has gradually increased through 2019 (see chart below). The number of container ships fitted with sulfur scrubbers reached 212 units (1.79 million twenty-foot equivalent units or TEUs) on Dec. 10, according to Alphaliner, with an additional 101 units currently at repair yards undergoing retrofits.

“Taken together, the scrubber-fitted ships will account for some 5.9% of the total number of container ships — or 11.8% of the total TEU capacity of the global fleet — by early 2020 when the new IMO 2020 sulfur cap comes into effect,” said Alphaliner.

“More scrubber-fitted container ships are expected to be delivered in the next two years, including both newbuildings and retrofitted units that could possibly bring their total number to some 1,000 ships for 10 million TEU by the end of 2022.”

The cost to lines of yard delays

However, the long line of container ships waiting to enter repair yards and their extended stays while there being fitted with scrubbers is costing carriers dearly in terms of vessel downtime, noted Alphaliner.

Average yard stays for vessels undergoing retrofits is now around 59 days, with 17% of vessels now out of action for more than 80 days. For larger ships, the cost of the downtime could be as much as $30,000 to $50,000 per day, although as FreightWaves has reported, the reduction in capacity is helping support spot freight rates.

“MSC has been the most badly affected by these delays, with at least 15 of its ships clocking yard stays of over 80 days” reported Alphaliner. “The yard delays are also causing severe congestion with at least five MSC ships currently waiting for up to eight weeks to enter the repair yards, with shipyards in the Zhoushan region in China especially congested in the last two months.”

However, those carriers that take the pain of lost revenues now are set to gain next year from lower operating costs.

“These ships will be able to enjoy the lower price of standard heavy fuel oil, with current IFO380 bunker price dropping to just $255/ton compared to LSFO price of over $510/ton [based on prices at Rotterdam],” noted Alphaliner.